MANNY PACQUIAO will run to be president in the Philippines in 2022, according to his former promotor Bob Arum.

The boxing legend, 41, was elected as a member of the House of Representatives in late 2009, taking his role the following year.

In 2016, he received more than 16million votes and joined the Philippine Senate, introduced as the people’s champion with his name read out in the same style as before a big fight.

And when his current term in office comes to an end in June 2022, the national treasure is being tipped to go for the very top job, currently occupied by Rodrigo Duterte.

The election to decide his successor is set for May 9, 2022 – by which time Pacquiao will be 43.Arum told WBC president Mauricio Sulaiman: “The first president I think we’ll get as a fighter is little Manny Pacquiao, who told me, once again.

Pacquiao – then and now..

Pacquiao – aged 40 – after WINNING his 71st fight and the WBA welterweight title. 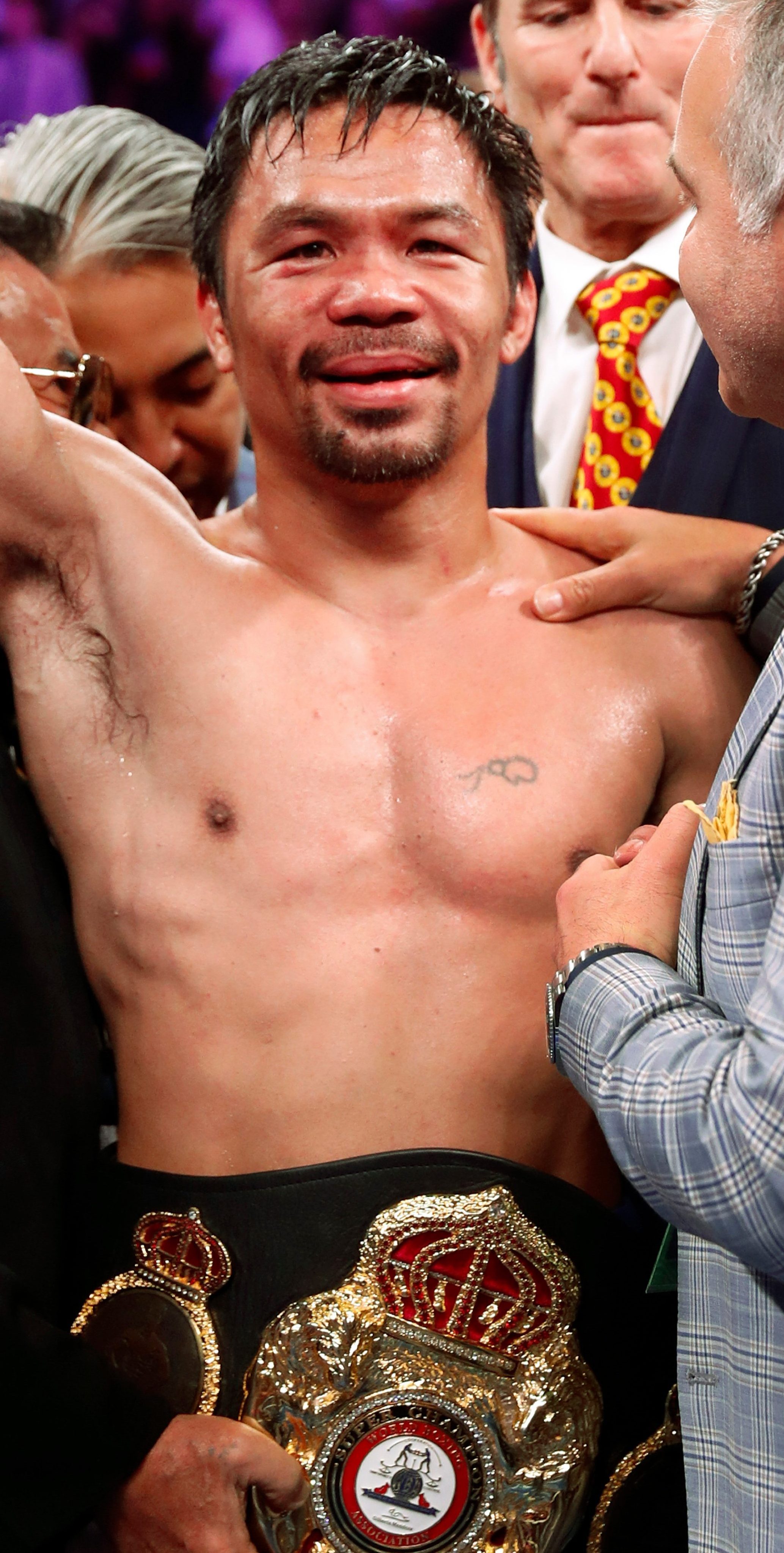 Despite his role in his national politics, Pacquiao has still not hung up his boxing gloves and is instead keeping in prime condition during the coronavirus crisis.

His most recent, against Keith Thurman last July, saw him claim the WBA welterweight world title.

Arum no longer represents Pac-Man but there was a suggestion he was on the Zoom call with the eight-weight world champ to discuss his next fight.

Pacquiao was tipped with taking on WBO welterweight king Terence Crawford in a unification bout.

And it is thought the fight with ‘Bud’ could be Pacquiao’s final appearance in the ring before he turns his attention to a new kind of fight – for the presidency.

The Nigerian novelist became the first black woman to top the fiction paperback charts in the UK, a development she described as surreal.

Bernadine Evaristo, a Nigerian-British writer, has been named the author of the year at the British Book awards, the first black writer to ever win the category.

The British Book awards, also known as the Nibbies, are produced by the UK’s book trade magazine, the Bookseller.

Ms Evaristo, who was the joint winner of last year’s Booker prize for her polyphonic novel, ‘Girl, Woman, Other’, also won the fiction category, snagging the prize ahead of her fellow Booker winner Margaret Atwood, renowned Canadian author of “The Testaments.”

Last month, the Nigerian novelist became the first black woman to top the fiction paperback charts in the UK, a development she described as surreal.

This was after a widespread criticism of UK publishing industry of having biases against black and Asian writers against the backdrop of the Black Lives Matter movement.

“I’ve been writing for a very long time, and it’s incredibly gratifying to know that my work is finally reaching a wider readership. It’s also fantastic to see so many other books by writers of colour storming the charts.

“I’m pretty sure this is unprecedented. Of course, this has been triggered by the tragedy of George Floyd’s death and we should always remember that,” the novelist said in a report by the Guardian UK.

Ms Evaristo is a signatory to an open letter from a newly formed Black Writers’ Guild which is calling for sweeping change in the British publishing industry. Publishers are “definitely listening to us today.” she qas quoted as saying.

Meanwhile, another Nigeria writer, Oyinkan Braithwaite, won crime and thriller book of the year for her thriller novel, “My Sister, the Serial Killer” which has received many nominations and won the Anthony award for Best First Novel.

jcyranking
Do Y’all See Denver Colorado Come Through!
#JUSTICEFORGEORGEFLOYD The people of Denver protested the death of George Floyd (and countless others) by laying on the ground (in 85 degree heat) with their hands behind their back for NINE MINUTES while screaming “I CAN’T BREATHE”
Sometimes,not all whites are racist ,some are seeing the injustice being melted on the black but what can the minorities do,when the real racist are the ones in power…An injustice to one is an injustice to all…May His Soul RIP
.
#georgefloyd #denver #protest #thisiswhatdemocracylookslike #america #africanamerican #allies #handsupdontshoot @ Denver, Colorado