Halle Berry has pulled out of a part in an upcoming film in which after facing online criticism she was expected to play a transgender woman.

In a live interview with Instagram on Friday, the actress said she hadn’t been officially cast for the part but was planning for it.

“[It’s] a story in which a woman is a trans-actor, so she’s a woman who has become a male. She is a character in a project I love to do, “Berry had said. She added she would like to take a “deep dive” into “that culture,” presumably referring to the trans community.

Berry faced online criticism, however, after the character was misgendered several times during the interview.

Others have said transgender community members should be allowed to play transgender roles.

She issued an apology on Monday night and pulled out of the position, saying “the transgender community will definitely have a chance to tell their own stories.”

She wrote: “I had the opportunity over the weekend to address my consideration of a potential role as a transgender man and I would like to apologize for those remarks.

“As a cisgender woman, I now understand that I should not have considered this role, and that the transgender community should undeniably have the opportunity to tell their own stories.

“I am grateful for the guidance and critical conversation over the past few days and will continue to listen, educate and learn from this mistake. I vow to be an ally in using my voice to promote better representation on-screen, both in front of and behind the camera.” 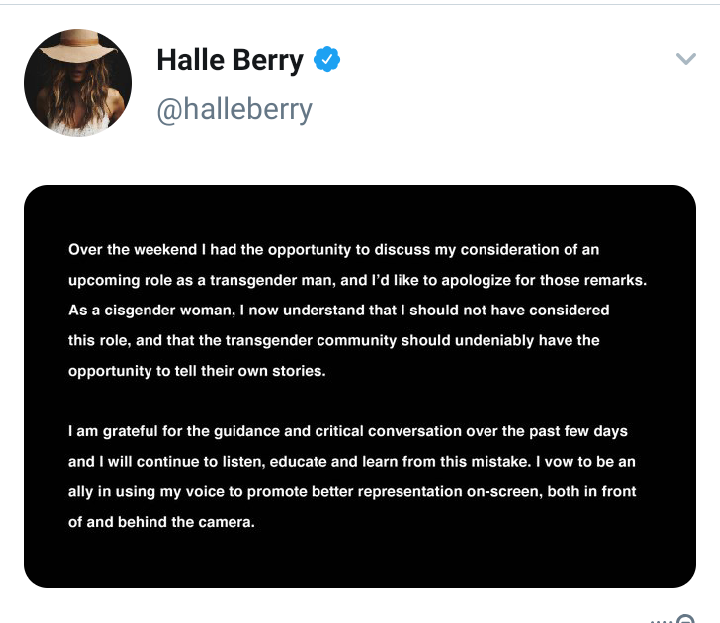 Halle Berry’s initial statement attracted the attention of the Netflix documentary’s Twitter page “Disclosure: Trans Lives on Film.” The show looks at Hollywood’s representation of transgender people and their stories.

The account of the documentary invited Halle Berry to watch the film in order to “understand how cis actors like yourself acting in trans roles have significant offscreen cultural repercussions.”

The account has thanked her for “listening and learning” after Berry ‘s apology.

The LGBTQ rights group GLAAD also replied by saying “We are grateful that Halle Berry has listened to and learned from transgender people’s concerns. Many influential individuals will do likewise. Watching ‘Disclosure’ to learn about trans media coverage is a good place to start. 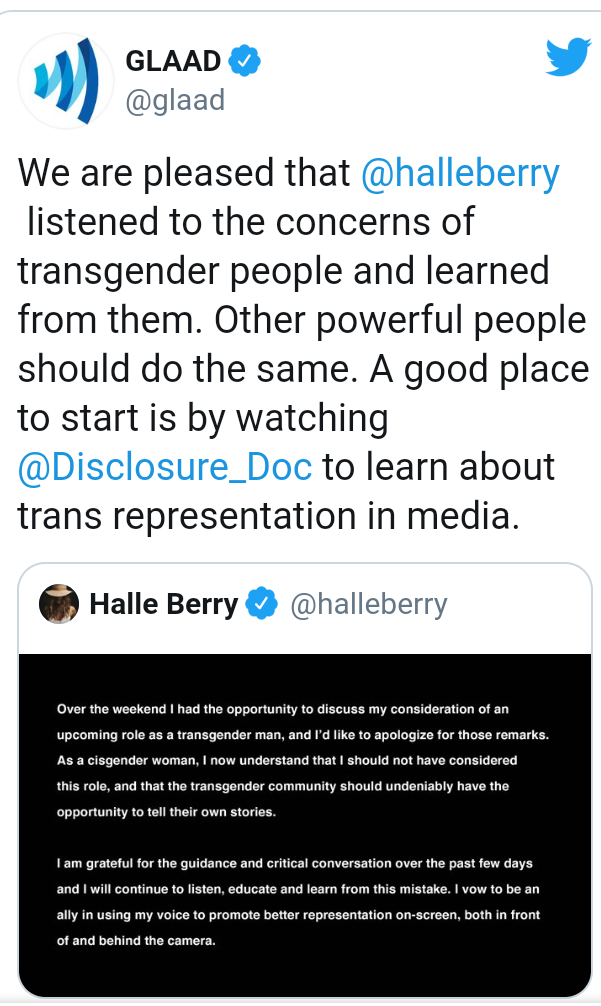 Related Topics:halle berry
Up Next

Dates For The 2021 Sanremo Has Been Revealed

Cuppy signs deal with Platoon for her debut album

Hello everyone, I’m Oluwatimileyin by name…

There’s this babe I’ve been crushing on for years, her picture is attached to this article.
Her mum’s shop was right beside my boss’s office. I always admire her everyday, every time I set my eyes on her.
That was 2018, I guess… I admire her and my heart desires her but I’m just a stupid shy guy, I couldn’t summon the courage to walk up to her to start up a conversation not to talk of telling her how I feel. All I do is greet her casually with inaudible voice and my agama lizard head (lol).

My boss changes his location 2019, so I didn’t see her some then but luckily for me, I saw her picture on a friend’s WhatsApp status and I got her number from the person around 2020 Dec ending….
I messaged her, introduced myself and she welcomed me. The idiot me still can’t start up a meaningful conversation with her so I only view her status and comment once in a while.
Whenever I chat her, our conversations was always normal greeting, (Good morning, how’re you, how was your day).
Some days ago, she requested for a WhatsApp voice call on her status and I asked if I can call, she said okay.. I even told her I’m a boring soul and she said we’ll see how it goes…
I called her and we talked for hours, like 2hrs or more. She’s fun to be with though. 2days after, she requested for WhatsApp call again and I called her. And this time we talked as if we’ve known each other for years, we talked for 5hrs before we decided to end the call. During the conversation, I told her I like her and I’ll want use to date but she said she’s not interested in any relationship now.
It’s not like she’s not interested in any relationship but I think she’s scared cos it seems she’s never been in a perfect relationship… She said her longest relationship was 10months.

TBH, I love this girl, and I’ve been trying to tell her how I feel but she’s just rejecting me… or maybe she’s rejecting me because I’m a broke nigga. I don’t know what to do, I’m confused.
All I think about now is Favour, nothing else.

Can someone please help plead on my behalf in the comment section below, she will surely view this article.

I’ll be the happiest guy on heart if she accept me.

Victoria Beckham shares photos of her daughter for important reason

Victoria Beckham is one of the many women participating in the new Instagram viral campaign #WomenSupportingWomen. The movement is a way for women to embrace and encourage each other.

A glorious image of her only daughter, the nine-year-old, Harper, is posted by the former Spice Girls star.

“Raising strong women is as important as supporting them,” she wrote in the caption. “#HarperSeven #blackandwhitechallenge #womensupportingwomen.”

The task is to upload a black and white photo of yourself, using the hashtag # WomenSupportingWomen and to thank the woman who nominated them with the hashtag # ChallengeAccepted.

While Victoria and David Beckham‘s works are demanding, the couple are extremely helpful parents and make sure one is always at home while the other works.

The pair are also the parents of Brooklyn, 21, Romeo, 17 and Cruz, 15. Often on social media they love their children and share their sweet messages with their fans.

Victoria Beckham: My secret to balancing work and parenting

The fashion designer gave a sweet look at her family life in a recent Youtube interview called Victoria Beckham’s secret to balancing it.

“I think that being a mum is the most important job in the world,” she said. “I love what I do professionally, and I take it very, very seriously, but there is nothing more serious than having children.

Dates For The 2021 Sanremo Has Been Revealed

Previously, we announced that the 2021 edition of Sanremo could not be held in February due to the COVID-19 pandemic. Recently , we reported it could be held a month later in March.

Now, according to reports, it has now been confirmed that the contest is due to take place from the 2nd to the 6th of March 2021. This news has been confirmed as new timetables have been released. It was announced during the announcement that Amadeus would continue collaborating with the festival.

Can Sanremo be used to pick the 2021 Eurovision Act of Italy?

As to whether or not the festival will again pick the 2021 Italian entry, this was not confirmed when the dates of the festival were revealed.

However, looking at past experiences of another national selection (Melodifestivalen in this case); Swedish national selections typically take place during the whole of February and the first two Saturdays of March.

It will also mean that a potential meeting of the Heads of Delegation will take place on 15 March 2021. That would then grant Italy an interval of one week if they wanted to use Sanremo to pick their entry.

However, the date of the meeting of the Heads of Delegation is still to be confirmed by the EBU.

Italy was one of the seven countries that participated in the inaugural Eurovision Song Contest in 1956. Italy achieved two third places in 1958 and 1963 before their first title. Italy’s first victory came in 1964 with Gigliola Cinquetti’s ‘Non ho l’età’ in 1964, which won the Copenhagen contest with 49 points.

They returned to the competition in 2011 and have since finished in the top three on three occasions – 2nd in 2011, 3rd in 2015 and 2nd in 2019. Diodato was chosen to represent Italy in 2020 with “Fai rumore” until the competition was cancelled.