Joan Laporta, former president of Barcelona, has revealed he’s “scared” star player Lionel Messi might leave the club because of the new board members who govern the club’s affairs.

Messi is signed at Camp Nou until 2021, although there have been indications that he has problems with Barca’s new president Josep Maria Bartomeu and other members of the board, with more rumors suggesting that Argentina is contemplating its future at the club for which it has been playing since the age of 12 years.

Recently, Bartomeu said Messi should re-sign and potentially see his career in Barcelona, but Laporta noted that the current members of the board could drive their star into a corner and make him rethink his future.

“I want him to stay in 2021 but I am scared that a bad decision of this board could result in an irreversible decision,” Laporta said of Messi at an event at Sant Joan de Deu hospital on Wednesday.

“It’s not BarcaGate, it’s BartoGate, I am worried about how the status of the club is being put at risk.” 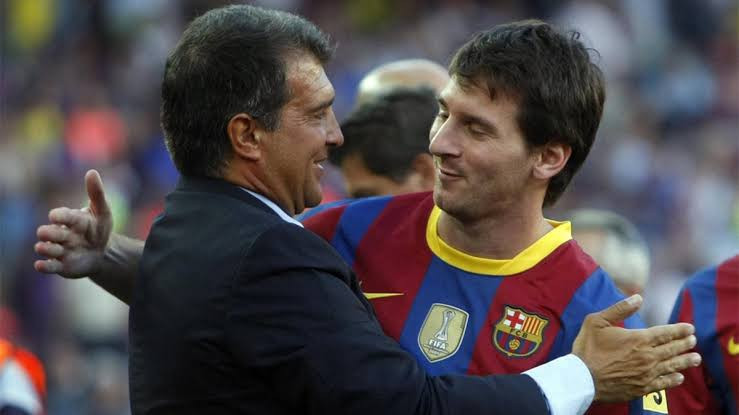 Laporta, who wants to run for president of Barcelona again, has also cautioned club legend Xavi against returning to manage the club before new members of the board are voted in.

“If I were Xavi, this board would never have me back,” Laporta said.

“I have more motivation to vote in the election every day. It takes some clear criteria for me to feel confident running right now rather than fighting for a few more years.”

Speaking in May, Laporta revealed that he would love to bring back Pep Guardiola and run the club.

“I am trying to pose myself as a candidate for the presidency,” Laporta told TV3.

“I’ve been President before so I’m ready to be back. It’s going to be a drastic situation in 2021 so we’re going to have to change that. I’m working with people I trust.

“I ‘d really like to see Guardiola come back, but now he’s in City and it’s a decision that Pep can make. He’s a model for Barcelona and many Catalans want him to train Barca again.

“I’ll be speaking to the guy we think will be Barca coach from 2021 at the right time.”

PSG Tell Barcelona What They Want For Neymar Transfer

Champions League draw in full: Quarter-final fixtures and dates, plus semis and final

Liverpool and Man United have conceded 6 goals in a match on the same day for the first time in the two clubs’ history.

Manchester United forward Marcus Rashford has issued an emotional apology top fans after his side’s display in their humiliating loss to Tottenham.

The Red Devils were humbled as former manager Jose Mourinho’s side cruised to a 6-1 win at Old Trafford.

Bruno Fernandes scored a penalty after one minute but defensive errors saw Tanguy Ndombele and Son Heung-Min secure the lead by 10 minutes.

After a red card for Anthony Martial, Harry Kane slotted into an open net while Son grabbed a second before half time.

Lesson to learn from today’s game

Ole Gunnar Solskjaer was the victim of a footballing massacre in Manchester after suffering his darkest hour at Old Trafford.

Solskjaer and his spineless United flops were left with faces as red as their shirts following their biggest hammering since 2011.

The fact it was Tottenham and former boss Jose Mourinho who delivered it just rubbed more salt into United’s gaping wounds – ones that could take a long, long time to heal.

United had been reduced to 10 men before half time, but this had little bearing on the eventual outcome.

The day had started with the news Edinson Cavani had jetted into Manchester to undergo a medical ahead of a free transfer to United.

part of the medical should have included him having his head examined – because the Uruguayan striker must be mad to even contemplate joining a team that now concedes goals for fun due to its defence being nowhere near the standards expected or required at this level.

Ousmane Dembele is reportedly now keen on signing for Manchester United – but Barcelona aren’t on board.

The France international has been linked with a shock move to Old Trafford as an alternative to the club’s number one target Jadon Sancho.

United have previously enquired about Dembele’s availability, but the former Borussia Dortmund forward snubbed their approaches.

Dembele has since fallen down the pecking order at the Camp Nou, and this, coupled with reports he has spoken to Paul Pogba about a move to Man United, suggest he’s had a change of heart.

Manchester United have previously enquired about Ousmane Dembele’s availability, but the former Dortmund star snubbed their approaches in favour of staying at Barcelona

#MUNCHE: What’s your take on one of the biggest rivalries in EPL history?

With two games left in this season’s EPL season, our attention is shifted to the most prestigious tournament, the English FA cup. Two rivals not of the same town or geographical location but of fans beef and fight for superiority lock horns by 6pm today.

Yesterday, the footballing world witnessed as upset as underdogs, Arsenal under the stewardship of former player and Assistant manager, Arteta produced a masterclass performance to defeat Manchester City. In a game where all hope was lost due to the circumstances around the Northlondon side, the gunners produced a shock result against the blues.

This is football, and it involves Manchester United and Chelsea today. Will we witness yet another shock result?

Manchester United have won Chelsea on all three occasions this season, including a 4-0 destruction when the season was fresh. This remarkable statistic has made so many United faithful confident that this result will yet again go their way.

However, Arsenal won yesterday after losing seven previous encounters against City, conceding 20 goals in the process. Will we see a repeat of yesterday’s scenario with Chelsea coming out tops or will United make it four wins on the bounce?